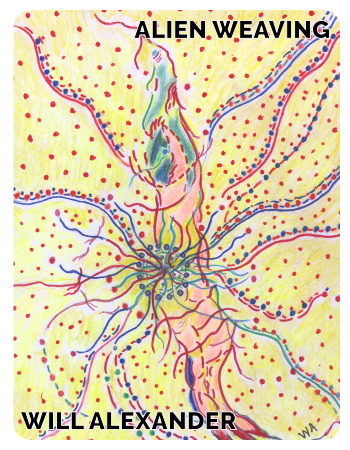 It is not an understatement to declare that Will Alexander and his writing are not of this plane. Luminous and impossible, ferocious and complex, divine and apocalyptic, invocation and resistance, the linguistic and psychic resonances of Alexander’s writings reverberate, magnetize, and ascend as “transdimensional movement” and neurological transcendence.

…At once a meditation on what it means to be a poet in dialogue with other poets (Vallejo, Lispector, Guillén, Varela), what it means to be an exile, what it means to be “part of the indefinable and part of the earth,” and what it means to confront the ways in which the “broken animal body became law.” Alien Weaving is written in a voice that has “inculcated singularity to such an extent that comparisons with the collective graph cease to adhere as an option.” I am grateful for these “letters that form from the ash of oblivion” which lead to an unutterable wow, a feeling that comes from knowing that the universe is altered and improved by the “incalculable energy” of this language.

—Daniel Borzutzky, author of In the Murmurs of the Rotten Carcass Economy

…here in the voice of the outcast Kathrada…Will Alexander strikes into the page an obsessional threnody being “Movement beyond inert fact; disablement of language as instrumental rationality; restoration of the feral and the oneiric…”

—Barry Maxwell, author of No Gods, No Masters, No Peripheries: Global Anarchisms

Kathrada, the phantasmal, transhuman poet-narrator of Will Alexander’s newest masterpiece, Alien Weaving, spins a vertiginous account of literature as the highest imaginative practice. “Of African origins,” born of the stars, possessing several libraries’ worth of knowledge drawn from fields as wide-ranging as mathematics and astronomy to literary history from across the globe, Kathrada brings a critical vision that spans the spectral to the quantum levels, embarking on her journey into the sublime maze of representation through language while showing readers how to do so. As much a tour of refreshingly innovative poetics as a poetic tour de force, Alien Weaving reminds us that as far as originality, artistry and literary mastery go, Will Alexander continually resets the standard.

“No one knows these notes are being attempted,” says poet Kathrada in Will Alexander’s Alien Weaving. And she’s right. There’s a blue-as-gold voice in American letters that goes unnoticed among the monotony of modern interests, a voice that inherits true transcendence as much as it ceaselessly creates it. Non-symbolic, beyond literary, blessed by the living spirit of Andre Breton, Will Alexander swarms what we call language into an alchemical cherry tree as much as he assaults it.

A carnivorous magician parting real waters, “totally unclassifiable by the experts,” Will Alexander unlocks the wind.

Climb the wind, pick up the wand, kneel at the alien throne.

-Michael Keenan, author of Translations on Waking in an Italian Cemetery